"We love Aoife and her new album, Carry the Day. The album and Aoife both deserve major attention. This woman can sing!"

This Irish singer stands out for her beautiful crystal clear warm vocals. Stylistically she successfully bridges Irish trad, contemporary singer songwriter and Pop. The album offers a great selection of self penned and other songs. Her own songs are very well crafted, with the first two tracks on the album, both written by Aiofe, being immediately convincing: "All along the wild Atlantic way", her love letter to the West of Ireland through the voice of an Irish woman who had spent her last 60 years in Canada,and "we know where we stand", reflecting on Irish identity. The remainder of songs are by contemporary songwriters and show a good hand of choosing songs. The musical accompaniment features guitars, bouzouki, fiddle, piano.
This debut album sounds fresh, positive and youthful, and should stand out on its own merits - no real need to mention the family connections with two of Ireland's best known singers - Aoife's mother is no other than Frances Black and her aunt is Mary Black.

Twelve contemporary folk songs make up this assured and engaging debut album from Aoife Scott. With a voice that is everything to be expected of the daughter of Frances Black and the niece of Mary Black, Aoife’s expertise shines through in clear and silky vocals.

The songs’ subject matter ranges from family relationships to social issues and aspects of Irish life and landscape. Attractive melodies feature throughout, epitomised in Down By The Shelleybanks, and Briege Murphy’s poignant Hills Of South Armagh. There are also fine variations in pace, from upbeat versions of Si Kahn’s What You Do With What You’ve Got and Eoghan Scott’s Deep Dark Water, to the gentle lilt of Sharyn Dimmock’s wistful Wallflower Waltz and Don Mascall’s touching Growing Years. Adrian Lawlor’s tale of the fascinating Eleanor Ambrose is another stand-out, where a historical story is told in a complex melody and neat rhymes.

Six tracks have been penned by Aoife herself in conjunction with the renowned Irish singer-songwriter Enda Reilly. These include the soothing Gaelic Sian Leat, and the jaunty single All Along The Wild Atlantic Way.

Aoife’s beautiful singing is backed by a cluster of highly experienced musicians who provide subtle and supportive accompaniment on fiddle, banjo, harp, accordion, piano, guitars and bouzouki. A booklet with notes on the songs and photographs accompanies the CD.

With catchy tunes which linger in the mind, and Aoife’s honeyed tones and delicate vocal inflections, Carry The Day is an accomplished production and satisfying listen, a firm foundation for the future.

Aoife Scott comes with a 24 carat pedigree, daughter of Frances Black, niece to Mary Black, cousin of Danny O’Reilly of the Coronas. You can hear that musical DNA on the self penned, (Co–written with Enda Reilly), opening track All Along The Wild Atlantic Way. It has a flavour of Tom Moore about it, could it be Aoife’s Carolina Rua? Aoife’s voice is reminiscent of her mother at her very best, in fact I’d say Aoife has even more control and poise. She shines on the track, We Know Where We Stand; it is wrought through with the unabashed assurance of today’s twenty–somethings.They have total confidence in their identity, delivered here over an insistent harp and guitar pulse. She has a fine grasp of Dublin’s social and political history on Eleanor Ambrose, a heroine of the 18th century. Musically this is a gorgeous acoustic album, thanks to the presence of Michelle O’Brien on fiddle, Eoghan Scott on guitar and the piano of Eamonn De Barra. The album’s sleeve notes come with three pages of thanks and each songs source is duly acknowledged. We know the Blacks have a fine tradition of singing, inherited from their grandparent’s generation in Rathlinn, here it mingles with Aoife’s own upbringing in urban Dublin. On Carry the Day, Aoife picks up the baton, in a seamless transmission of folk between the generations. The joy here is the skill and sensitivity Aoife injects into new songs, and the care in which it is all so finely stitched together.
Seán Laffey

The daughter of Frances Black, Scott has very recently followed in her mother’s footsteps in beginning a solo music career.  Her debut album, “Carry the Day” hit music stores six months ago.  She accompanied the release with a show on the “Late Late Show.”  Scott is the most traditional singer of the next generation of Blacks, but she too puts her own spin on things.   There is a hint of an indie interpretation of the Irish folk tradition akin to her cousin, Róisín’s in her songs, even in Irish language songs, like “Fásaim.”  Some of my favorites on the album, like “Deep Dark Water” and “What You Do With What You’ve Got,” turn to Americana and country music for lively acoustic original tracks.  Other songs, however, like “Slán Leat” preserve the kosher Irish folk tradition.  Scott’s voice is sweet, wispy, and an important installment in the legacy of traditional Irish music.

Folk singer-songwriter Aoife Scott has an indefinable quality to her luscious voice that simply compels you to listen ... and once you listen to one song the rapture is complete, you’re hooked. Perhaps more widely known to many as lead singer with The Outside Track, now with her debut album ‘Carry The Day’ that distinctive voice is reaching out to a wider audience. A speaker of both the English and Irish languages, Aoife is steeped in musical tradition and brings the values of that heritage to her songwriting and performing.

The album includes six songs penned by Aoife and Enda Reilly, plus six more from such worthies as Don Mescall, Eoghan Scott and Briege Murphy and throughout Aoife lifts each song with care and holds them in the embrace of her voice. The songs on ‘Carry The Day’ move their narratives across places, people, experiences and memories that all hold special places in Aoife’s heart and sharing is a wonderful experience. From the stunningly beautiful ‘All Along the Wild Atlantic Way’, and ‘Know Where We Stand’ to ‘Gypsy Warrior’ and the raw emotion of ‘Fasaim’, the magic is palpable.And listening to Aoife deliver the simple truth of Si Kahn’s ‘What You Do With What You’ve Got’ and the simple understanding of ‘The Wallflower Waltz’ is an experience not to be missed. 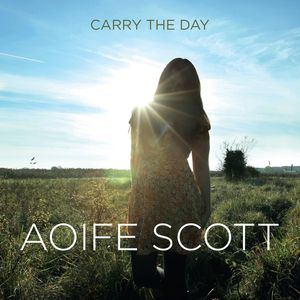 This debut release by Dublin folk singer Aoife Scottdelivers a very satisfying mix of new material alongside some equally admirable covers. The pressure of being part of the Black family with mother, Frances, and aunt, Mary, having established such strong reputations before her, seems not to have affected her approach.

Confidence in her own material, and some well-orchestrated arrangements lift Carry the Day high above the plethora of traditional folk albums that are released each year. Simply interpreting traditional standards was not an option, and her preference for new material carries the day.

The opening All Along The Wild Atlantic Way may sound like the title of a promotional piece commissioned by Fáilte Ireland, but is in fact a self-penned composition, with song writing partner Enda Reilly having an equal hand in it. With a storyline that would feel right at home in a Cecelia Ahern book, a widow waits for her deceased partner to return and bring her back along that route. It’s a good song, catchy and emotional, and why Fáilte Ireland haven’t grabbed it is a mystery.

In total six of the twelve tracks have been co-written with Enda Reilly, including We Know Where We Stand which deals with this nation’s place in the world and Down By The Shelleybanks, a love song to Dublin. High on imagery and emotion and with restrained arrangements Aoife’s warm and quirky voice works a treat. Her warm and effervescent approach to her music as demonstrated on her recent Late Late Show appearance feeds into the tracks.

The mid-point of the album is anchored by a stark and powerful version of Don Mescall’s, The Growing Years. Aoife has a sharper more clipped delivery style with traces of Mary and Frances at times evident.  The cumulative effect however is an album that dares and wins. We are blessed once again with some fine songwriters finding their way onto new album releases and Carry The Daylikewise scores highly in this regard. A strong debut from an artist that may very well have a lot more to say.

The album is now on sale on iTunes  as well as on Aoife’s website www.aoifescott.com. You can also read our launch article. 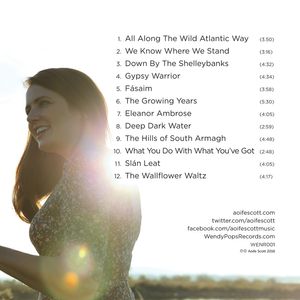 Lengthy percolation is writ large on this solo debut from Aoife Scott. As co-writer (with Enda Reilly) of half of the 12 songs here, Scott is flexing her writing chops and vocal cords in both Irish and English in equal measure, and with some richly layered results. Her vocal tone strikes a fine balance between keenly invested emotion, lyrical clarity and intuitive phrasing: as a scion of the Black family, she can hardly deny her genetic heritage. Eoghan Scott’s guitar, Eamonn De Barra’s piano and Michelle O’Brien’s fiddle are particularly perceptive. The roll call of place names occasionally nudges the earlier songs towards Bord Fáilte territory, and Scott’s vamping up of What You Do With What You’ve Got sacrifices the tender core of the song somewhat. But the final hidden track, O’Carolan’s Sí Bheag, Sí Mór is a delightful bookend to a fine debut.

Listened to the album yet? Let me know what you think by posting a review below... I would love to hear what your favourite song is!
Add message